Starting and target shaft sealed off from potential water inflows

Seepage tunnel in the Sylvensteinspeicher dam

As the water reservoir, which is Bavaria’s oldest and most important for flood protection, the Sylvensteinspeicher has been fulfilling its purpose and providing its protective effect during severe flooding for more than half a century, especially for the city of Bad Tölz and the state capital of Munich. As expected, the dam has generally settled into place over its lengthy period of operations, and the exceptional strains resulting from extreme flooding in 1999, 2005 and 2013 have left their mark. As a precaution against the impacts of possible climate change and taking into account the new DIN standards, which have been valid for dams since 2004, the water management administration, as the operator, has decided to install an additional seal in the dam core and underground, as well as to provide a fully renovated measuring system for potential seepage. The barrage is located in a valuable natural area, and the dam itself is within the FFH area (European Reserve Flora Fauna Habitat). As a result, the activity there should be as environmentally friendly as possible.

The 48 m high and 180 m long Sylvensteinspeicher dam is situated on a 100 m deep valley, which the Isar River has cut in the Bavarian Alps and refills with sediment. During the construction of the dam in the 1950s, the erosion gully was sealed with clay cement through the use of a seven-row grout injection curtain. The slender central seal core consists of artificially assembled earth concrete (gravel, fine sand, silt and 1% sodium bentonite additive) with subsequent air- and water-side filters consisting of moraine gravel. Through several exploration wells (which are up to 140 m deep) in the valley, alternating superimpositions of gravel material, which is rich in sand or silt, in part with deposits of lake marl, have been identified. Within the subsoil, which had been compressed with clay cement suspension during the previous construction period, strongly fluctuating permeabilities were also determined.

The new and more efficient sealing system requires the installation of a 170 m long, 70 m deep and 1 m thick diaphragm wall made of clay cement in the gasket core. It reaches as deep as 25 m below the level of the dam foundation. Behind that, 54 drainage piles with a depth of about 41 m were produced in order to detect possible low quantities of seepage, the water of which is introduced at the base of the new seepage tunnel. Modern measurement technology enables a permanent, sectoral monitoring of the seepage over the entire length of the dam.

The 190 m long seepage tunnel was created through micro-tunnelling construction with a mix-shield (Ø 3.05 m) for driving through rock and loose stone. For this purpose, an 80 m long access tunnel at the foot of the Sylvenstein wall had to be prepared, at the end of which the starting cavern (ca. 16 x 9 x 8 m/LxWxH) was located. The outbreak occurred through the use of mountain-protective blasting technology, and showed a compact, sturdy mountain, so no additional rock reinforcement would be necessary. On the Hennenköpfl side, a 41 meter deep vertical target shaft (Ø 6.50 m) was blasted out across the length of the approximately 20 m long target cavern. As determined by the exploration drilling, highly variable permeabilities behind the start cavern as well as in front of the target shaft had to be reckoned with in the transition zone between the bedrock and the dam, which was piled with rock. In order to minimise problems during the driving of the tunnel boring machine and to prevent the ingress of water in the start cavern and the target shaft, this unpredictable rock area had to be stabilised and sealed. Taking into account the infrastructure, the environmental constraints and the tight local conditions, stabilising the rock through freezing was not an option.

Water-filled capillaries, tightly layered sands or silts, similar to the current rock situation, can be penetrated. The reaction time can be between 90 seconds and 90 minutes, depending on the ambient and ground temperature.

From a technical and environmental point of view, modern gels should necessarily correspond to the so-called 5th generation. These gels are not based on water glass and do not contain acrylamides. They are permanently resistant and should be safe with regard to groundwater cleanliness. Since 2008, acrylate gels have had general technical approval by the Deutsches Institut für Bautechnik (DIBt) for use in injection into the subsoil. An example of such general technical approval is [2].

Selection of the injection concept

Stabilisation through hard gel injection was chosen. The acrylate gel SolidCryl had achieved satisfactory results in laboratory tests. The Technical University of Munich (TUM) had readjusted the grading curve and saturation inside the dam and conducted a series of injection tests. Despite complete saturation after injection with the mentioned acrylate hard gel, the injected areas displayed a compressive strength of about 3 N/mm2, while dry areas even developed a compressive strength of about 15 N/mm2 after injection. Together with the Technical University of Munich, a series of injection test were conducted in advance. In the case of sample injections, assuming a 20% saturation, different technological specifications regarding delivery, injection pressure as well as arrangement and grouting cycles of the sleeve pipes was defined, in addition to the variation of injection parameters.

The transition areas before the start cavern and the target shaft, which were difficult to estimate, were stabilised before conducting the TBM by means of hard gel injection. The target cavern was reached after 16 days of pipe jacking. The functions of the Sylvensteinspeicher, which pertain to water law (flood protection and low water levels), were able to be maintained throughout the construction period.

Despite the soil conditions (which are difficult to assess) in the start and target areas, the identified technical and environmental requirements could be met without freezing. As a result, the activity was as environmentally friendly as possible. The target strengths were achieved and the seepage tunnel could be created under the condition of micro-tunnelling construction. 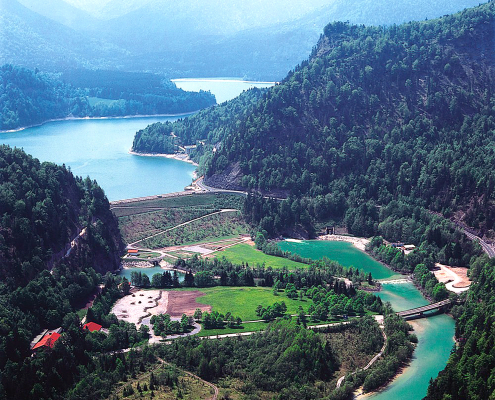 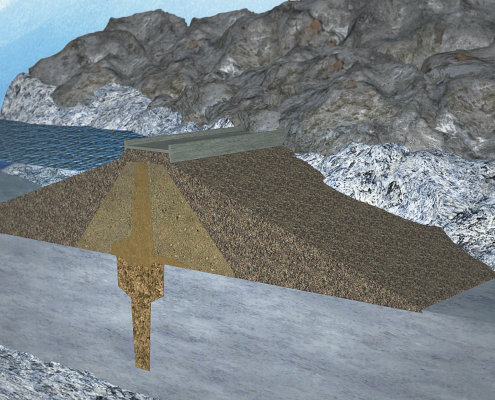 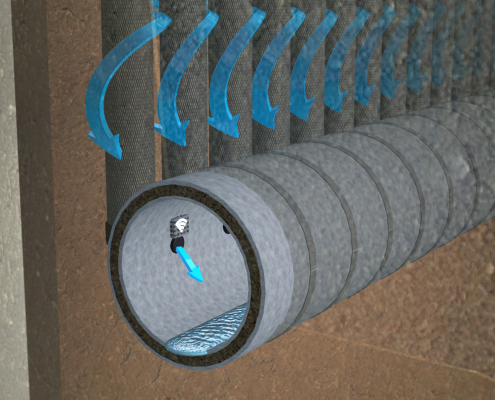 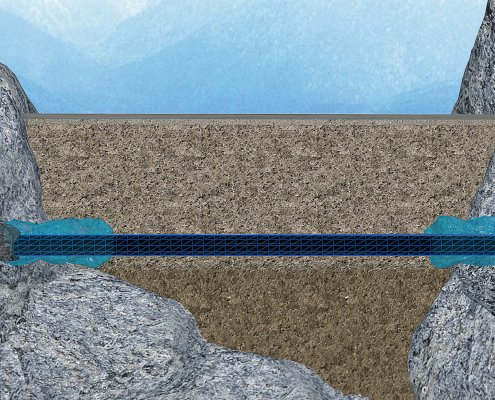