Expansion of the art gallery in the Zwinger, Dresden

For visitors to the art gallery, an underground tunnel has been extended in the east wing of the Zwinger in Dresden. From a geotechnical point of view, this was a very challenging undertaking. The necessary improvement of the ground could be achieved under difficult circumstances by means of injections. In the process, the historical monument, existing lines, the ongoing museum operations and the difficult construction ground posed particular challenges.

In the new exhibition concept for the Old Masters art gallery, the tunnel was to be integrated into the exhibition as an underground passage. In addition, the passage width of an 11 m long, narrow installation path in the east wing of the Zwinger was to be extended from a mere 1.50 metres to approximately three times its size (Figure 2, 3). The close working space was further restricted by cables and a heating duct, which could not be easily removed because of ongoing museum operations. Throughout the reconstruction measures, the museum operation occurring immediately above the installation program was to be disturbed as little as possible. Therefore, the expansion could only take place in the form of closed construction. Building ground investigations revealed that the consistency, which would be statistically relevant for vertical digging, was not sufficiently sturdy. By means of injections, an independently viable soil body was to be established.

The injection material is introduced directly into the pores of the soil or in the crevices of rocks. Through a chemical reaction or physical change of state, the injection material hardens and retains its form and location after the grouting. The injected soil area is thereby solidified and simultaneously sealed. Injection process, injection pressure and injection material are selected according to the geological, physical and chemical conditions of the ground, as well as the anticipated water and other relevant conditions. In order to assess the interaction between subsoil and injection material, sufficient experience and knowledge is required. Generally, the following applies: The more fine-grained and compact the soft ground is and the lower the permeability, the more narrow the possible choice of suitable injection materials will be.

During jet grouting (i.e. high-pressure injection), the construction ground is penetrated at a high pressure of up to 800 bar with liquid injection material on a cementitious base. The high pressures can cause elevations of the ground, which had to be avoided in the historical building of the Zwinger. Therefore, only injections with lower pump pressures were suitable.

Various aspects have to be considered in the selection of the injection material. Figure 5 shows the application possibilities of different injection materials depending on the permeability of the soil. In addition, the water conditions have a significant influence on the selection of the injection material. For example, cement mortar could not be applied in the case of a significant flow of subsoil, since the injected cement emulsion could be dissolved by the groundwater. Furthermore, additional water would be added to the building via the mortar, which is critical in swellable soils, for example.

The injection concept was developed jointly by Jähnig GmbH (located in the region of Dresden) as the executing company and TPH Bausysteme GmbH of Norderstedt. Pursuant to builder requirements, a soil body with a target strength of 4 N/mm2 was necessary. The distance between the injection sites was determined to be 60 cm, in consideration of the forthcoming subsoil. The levels were offset horizontally in relation to one another in order to achieve an overlap of the individual injection bodies.

In order to achieve a securely standing pit wall, which would simultaneously enable free excavation, a reduced solidification to about half of the planned strength value of 4 N/mm2 was planned in the later demolition area. The associated reduction in the amount of the required injection material lead to a reduction of the respective costs.

Acrylate gels were used as an injection material for the soil stabilisation in this project. Acrylate gels are extremely low-viscosity injection materials composed of derivatives of acrylic and methacrylic acid as well as amines and salts, which cure into a rubbery, flexible product. The reaction time can be between 90 seconds and 90 minutes, depending on the component, ambient and floor temperature. From a technical and environmental point of view, modern gels should necessarily correspond to the so-called 5th generation. These gels are not based on water glass and do not contain acrylamides. They are permanently resistant, highly flexible, ground water neutral and, moreover, for soils interspersed with acrylic, they can continue to be used or discarded without any problem. Since 2008, acrylate gels have had general technical approval by the Deutsches Institut für Bautechnik (DIBt) for use in injection into the subsoil.

An example of such general technical approval is [3]. A parent component and catalyst form a mixture that is usually identified as an activated A-component. After mixing with an activated B-component consisting of water and initiator in a ratio of 1 : 1 parts per volume, a solution with a water-like consistency results. Due to the low viscosity, the injection material can easily penetrate into the ground. A grouting of very small compression fractures and cavities as well as tightly layered sands or silts similar to the building conditions at the Zwinger in Dresden is therefore possible with acrylate gels.

Acrylate gels cure to an elastic product, without producing rises through any repression of the subsoil. Due to the water, which is no longer free-moving within the gel structure, there is also no increase in volume in the case of heating or freezing. Preliminary testing on samples taken from the area of the tunnel extension in the Zwinger aided in the pre-selection of injection materials. Through the investigation, it was possible to exclude that injected fissures and cavities would arise as a result of temperature changes and that new waterways would be created as a result.

For the precise adjustment of the injection parameters, which would be required later and in order to verify the suitability of the acrylate gel, sample injections were first conducted in November 2014 in the area of the installation passage that was to be expanded. The objectives included the final selection of the injection material and the sufficiently precise determination of the necessary amount of grouting in order to achieve the desired strength.

The two acrylate gels that were available for selection in the end differed from each other in reaction rate and price [4, 5]. The one gel also has general technical approval [3] while the other does not. The knowledge gained in the test fields showed that both of the low-viscosity acrylate gels [4, 5] were effective in spite of the varying grain size distributions and stratification. The two tested acrylate gels did not display any significantly different results. Therefore, the most cost-effective one was able to be used [5]. As sufficiently necessary injection volumes, 80 l/m3 in the area of the later demolition and 100 l/m3 in the area of the permanent soil stabilisation were defined.

The injection work was conducted by Jähnig GmbH from early December 2014 until early February 2015. The temperatures in the working area for the work team and the injections were unfavourably high, due to the heating pipes and electrical cables in the installation corridor. By uninstalling the heating duct, establishing a cooling duct and opening the corridors and doors, the temperatures could be reduced. This improved the working conditions and was also relevant for the success of the injection. This is due to the fact that, at high temperatures, the reaction of the gel would have been greatly accelerated, and either a complete filling of the planned injection area would have been prevented or retarding additives would have been required.

The utilised HD 3/8 inch ram injections are an easy alternative to sleeve pipes and are commonly used for softer, non-rocky building sites. They generally consist of 50 to 100 cm long tubes, which can be connected by means of threads into an endless strand. The outlet of the lance tubes have to be drilled on the injection targets at the factory according to the specific project, and then placed into the lance strand. Such lances are used to depths of down to 20 meters and for various injection materials. (Figure 7, 8)

The individual components of the injection material were joined via a connecting piece and introduced with about 20 bar in the injection lance. While the lance was partially pulled back after the ramming, the injection material penetrated the approximately 4 mm openings in the ground. Ideally, a column-shaped grout body would result. Usually, pneumatically operated injection pumps are used, which should preferably be fitted compulsorily to avoid mixing errors, and which should operate both pistons simultaneously by means of an air engine. The injection material is extracted directly from the containers. Unlike in the case of cement pumps, flow rates of 10 to 20 l/min are sufficient for such injection devices, due to the fact that the injection materials are very effective. (Figure 9)

The choice of the injection concept was influenced by the experiences of the construction company of the special undertaking for injection technology as well as the results of the test fields. Despite the critical soil conditions and the sensitive conditions, the provided technical, environmental, economic and construction management requirements could be met. The target strengths were achieved and a manual demolition for the tunnel extension was possible. A total of around 20,000 litres of acrylate gel were grouted and, as planned, a solidified soil body with an approximate volume of 225 m3 was produced. About half of the soil body was located in the later demolition area and was grouted with the lower injection fuel volume. This allowed a little more than 10% of the injection material to be saved and, because of the lower degree of strength, the excavation was subsequently facilitated. 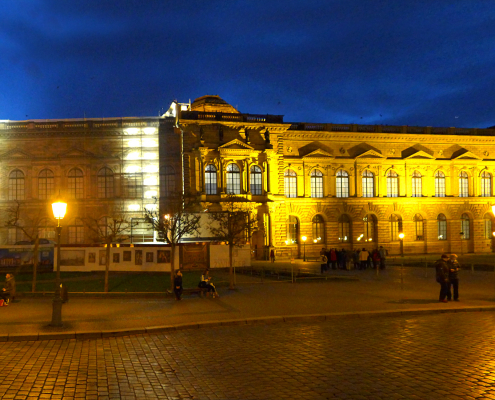 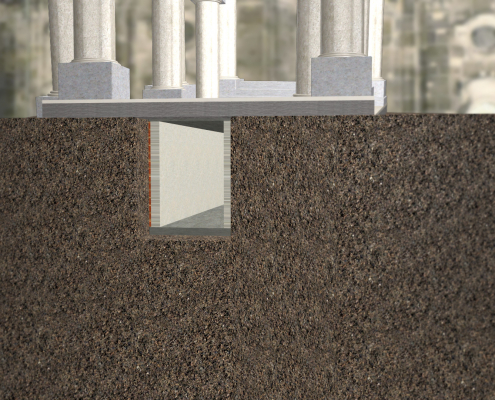 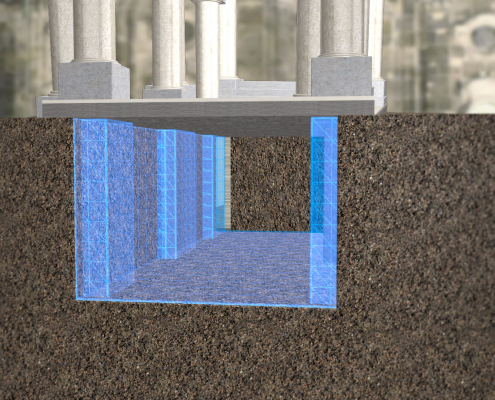 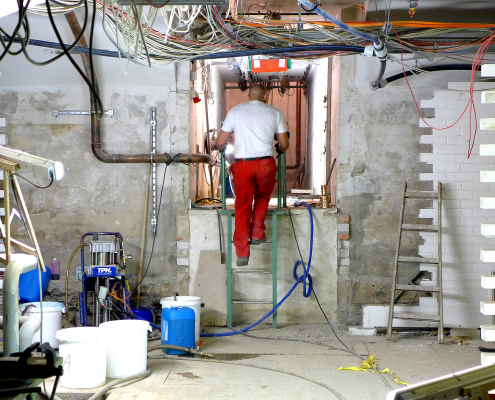 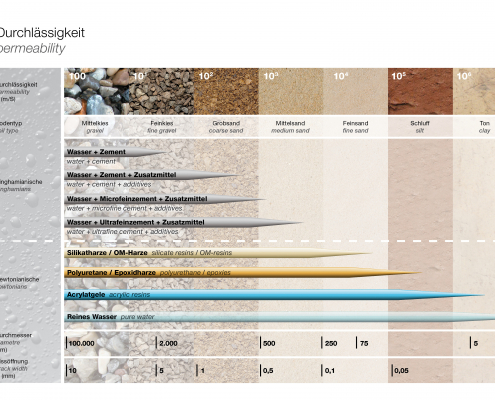 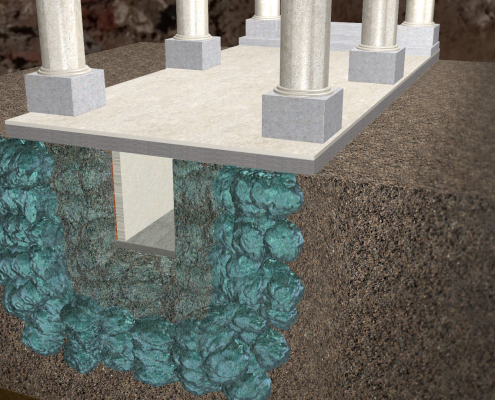 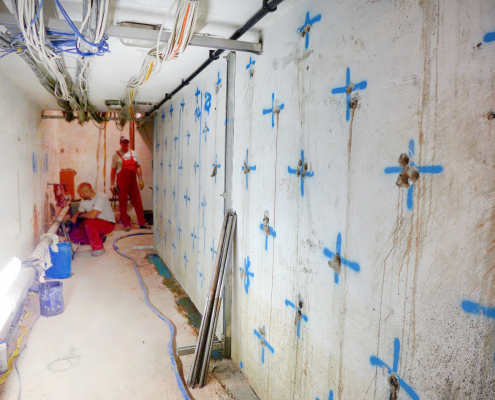 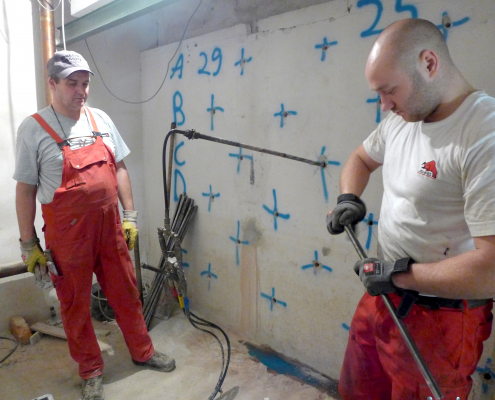 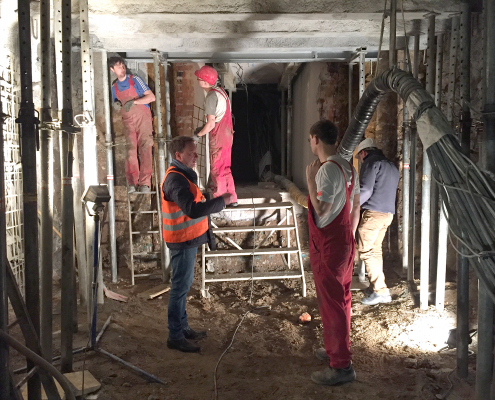 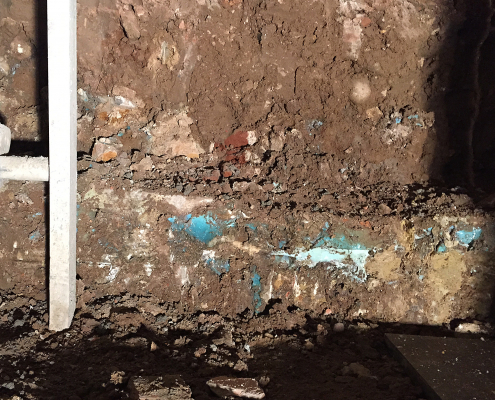